You are here: Home » Brushbots 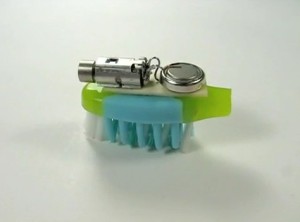 Woohoo! Have spent the last few days being miserable with flu so to cheer myself up have been making toothbrush robots and racing them with my grandchildren. Bought the components ages ago but it took till today to actually get them out of the box…

Pager motors – these are the tiny motors you find in mobile phones and…pagers.  (They have an offset weight on the drive shaft which makes them vibrate)  Best place to get them is from ebay – the deals vary but my last lot cost £25 for a hundred.  Make sure you buy ones with wires attached as you really don’t want to get into small children messing with hot soldering irons.  Unless they are really annoying.

Something to chop the handles off the toothbrushes – depends what you have and what works for you. I actually used a toe-nail cutting scissors as I don’t happen to have a workshop in my bedroom but I’m sure DT teachers can improve on that.

This is the really tricky bit and you have to experiment until you get it right. Basically, you want to slant the bristles in one direction and splay them out a bit for stability. However, experimenting with the amount of slant and splay to get the ‘best’ result is part of the fun – depends whether you want stability, speed, direction etc!  Simulate the movement by letting the children tap down several times on the top of a toothbrush with vertical bristles and on another with slanted bristles.  (Depending on their level of physics – ask them to draw a diagram explaining the difference)

To slant the bristles, stand your toothbrush in a jug of almost boiling water. (‘Almost boiling’ is an engineering measure, not a physics measure, by the way, and this is an engineering project!).  DO NOT CHOP OFF THE HANDLE UNTIL YOU HAVE DONE THIS BIT! (I speak from experience!).  Fish it out after a few minutes and bend the bristles by pushing the brush-head over something smooth and flat. I used a plate, which had a few sandwich crumbs on it, but worked extremely well.  Bash it against the plate for good measure if the bristles are not splayed out. Then plunge the brush into a cup of cold water – even better if you can be bothered to find ice cubes – and leave for a few minutes.  You might want to explain the chemistry of this.  On the other hand you could suggest they ask their chemistry teacher – especially if you don’t like the chemistry teacher.

Cut off the handle of the toothbrush just after it pokes out of the brush head (another engineering measure).

Stick the foam (or blue tack) to the top of the brush. Stick the motor to the non-handle end of the brush. Make sure that the spindle with the weight is overhanging and not touching the foam (Doh!) – and the wires are pointing to what was the handle end.

Stick the watch battery on the handle end with one of the motor wires underneath the battery.  Fiddly – I used a tiny strip of gaffer tape (another engineering basic) but I’m sure there are better ways you could dream up.

Check to see if you brushbot actually stands up at this point and tweak if it doesn’t.

Finally, stick the other wire to the top of the battery. This is fiddly – I used a tiny strip of gaffer tape (another engineering basic) but I’m sure there are better ways you could dream up.

and let it go on a smooth surface – I used a tray.  It will start vibrating as soon as you make the connection and as the basic bot has no switch, you need to stop it by unsticking the masking tape.

It will work first time – but never as you want it to.  This is where the freezer bag ties come in.  Wrap one under its ‘body’ and twist at the top. Tightening or loosening the tie will increase the pressure on the motor and alter the vibration.

You can also fiddle with bits of blu-tak to weight the Brushbot in different places. 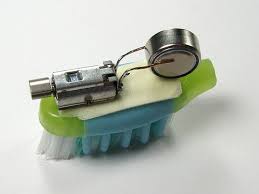 Or trim the bristles with a nail scissors.

Or re-soak the bristles in hot water (use a tweezers or tongs this time!) and adjust the rake of the bristles.

Or try reversing the positions of the battery and motor

Or stick the battery vertically

Things that can go wrong

Because there is no switch, kids will leave the batteries on rather than un-sticking the connection and the battery life is about 30 minutes for the batteries I was using.

Problems actually getting the bot to stand up.  The ONLY solution is to fiddle around. This is why you need to splay the bristles out as it improves stability but also decreases speed and less likely to topple when it hits something.  The compromises top design engineers have to make….

If you do have to buy toothbrushes, get the multipack cheapest ones – they work better than the sophisticated ones with dots and ridges and other over-engineered features.

Try prising open an old phone and fishing out the motor and battery and use those.  (There are no wires I discovered so you have to bend the prongs and fiddle around with joining wires)

Tomorrow – assuming I’m still far too ill to actually work – I am going for the programmable one. Or at least one with a switch.

Then I wonder if I could progress to a nail brush? A scrubbing brush? A broom head…..watch this space!

By the way – this is not an original idea.  I saw them originally advertised in kit form that includes all the parts you need to build 4 BrushBots in the MAKE BrushBot Kit — inspired by the original Bristlebot how-to from our friends at Evil Mad Scientist Laboratories.  However, if you have 30+ kids in a class, this is really not an option.  (The design is marginally different but that’s because the shape of the components was different)

The original EMS design is shown here (thanks to Jeff Proctor) – mine was very similar but I’m glad I was ill and couldn’t rush out and buy the toothbrushes he recommends. I had far more fun with the old ones and learned more – hence the hints.

And thanks to science buddies for picture of race track!