You are here: Home » iPad Orienteering with Klikaklu 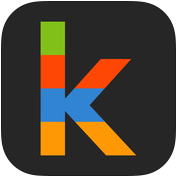 As teachers, we don’t often associate IT with PE. This guest post comes from Ben Wiggins and shows you how.

“Our Grade 2/3 composite classes have been involved in an iPad pilot project this year. Each class has 6 iPads in class which they can bring to specialist lessons such as PE. In PE we have used them, mainly with free apps, in a variety of ways including; completing google forms and book creator for reflection tasks; measuring heart rates; collaborating in the development of team strategies using Coachnote; recording performances with Ubersense and playing them back in slow motion; scanning QR codes to facilitate independent learning and collecting evidence of student learning in an online portfolio with Threering.

One of the most popular activities with the iPads has been Orienteering. We ran this unit concurrently with coordinates topic in Maths class. After a range of lead-up activities we moved onto completing orienteering courses on campus, using the free iPhone app Klikaklu. 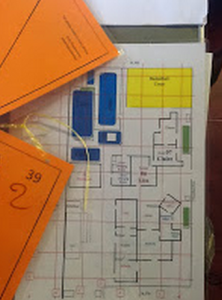 Using Klikaklu the students chose a course and scanned the QR code to receive the first clue of the location they had to go to. All of the clues were grid references from the school map. Once the students had worked out the clue’s location, off they ran. When they got there, they pressed the reveal button which then showed them a picture of an object in that location, which they had to also photograph. If their photo matched they were given the next clue. 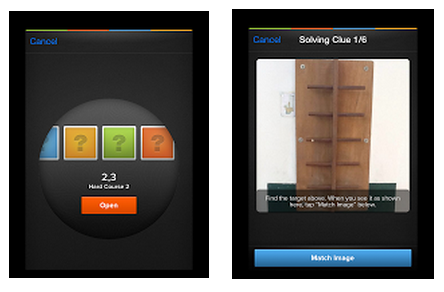 The actual skills of taking a grid reference and working out where it is on a map and going to that location to find an object, are the same as in previous years. The big benefits of using Klikaklu, apart from increased student motivation, was the management of the lesson.

It didn’t take me long to set up 7 courses of varying difficulty. As they involved photographs of permanent objects (I did made the mistake of using the recycling bins as one location, and found one afternoon they had been taken away to be emptied), it meant no more setting out orienteering cards and collecting them in again everyday, or having to go off to find cards which have been accidentally moved!

With the app checking to see if the photographs match ,rather than me or students checking for correct letters or punch stamps on an answer card, it allowed me more time to help students master grid references, which increased the success rate.

I also upgraded my app, so that I could use Staggered Hunts. This means that several groups could all choose and complete the same hunt at the same time, but they would each be given the clues in a different order, thus avoiding groups just following each other. Another option I will use in the future is the Scavenger Hunt, when the students are given all of the clues and then they have to work out the quickest way to get to all of the locations – a bit more like ‘real’ orienteering. I also plan to have the students creating courses for each other.

I will leave the final word to one of our 8 year old boys who often finds PE a bit of a challenge. He ran past me several times in the lesson shouting out that this is brilliant. At the end of the lesson he came up and gave me a big hug and thanked me for “the best lesson ever!” 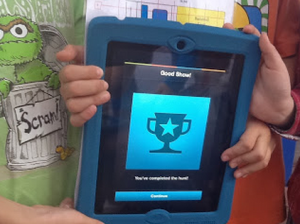 Ben Wiggins is presently a PYP Physical Education teacher at the International School of Phnom Penh, Cambodia. He has previously taught PE in the UK, Tanzania, Saudi Arabia and Thailand, to students as young as 3 through to those in University, and lots in between! You can can follow Ben’s journey of trying to integrate technology into his PE classes on his blog Ben’s PE Musings and on twitter @PE8574