You are here: Home » Reading bags 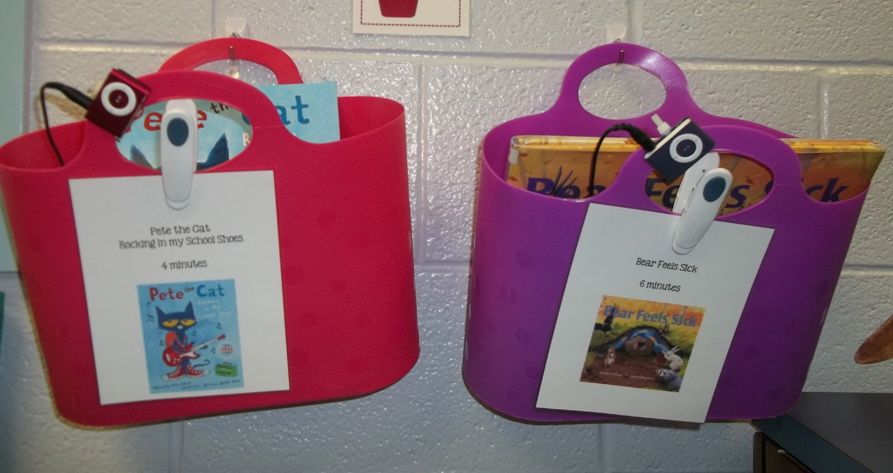 Having great fun over the last few weeks trying to produce audio kits for primary classroom ‘reading corners’. I found this picture ages ago on Pinterest and have been meaning to try it out. (If anyone recognises it, please comment and tell us whose idea it was so that we can thank them properly).

My target was to produce a set of 3 baskets for under £20 – ambitious but, as I have found out, achievable with a bit of thought. I managed to find 12 baskets for about £7 in total from ebay.  The first mp3 players I bought were second hand 2nd generation  iPod shuffles, either bought from ebay or donated.  (Found out that those with an inscription are MUCH cheaper and it really doesn’t matter if they say ‘Happy Birthday Sarah’ on the back because you can’t see it anyway).  Then I discovered some shuffle look-alikes that came in all the same jewel colours as the genuine article for £1.99 from both ebay and Amazon. The only thing is they come with a slot you have to put a mini SD card in – 1GB more than adequate.  The cards you can get from anywhere but I got a good deal on Amazon x3 for £3.49. So far, so good – if you do the maths the price is now £3.73 per unit. 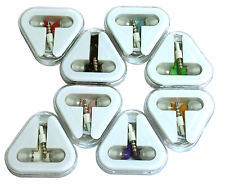 So, #fail, I did not hit the target but I was only £1 over – not bad for a set of 3 self-play audio books to enhance classroom reading corners!

By the way, the mp3 players are clipped on then secured with ‘zip clips’ – those things you use for tying up plants. If you cut off the long tail they are almost impossible to get off without cutting them.  Headphone leads can be clipped to the side of the basket (making sure the one end is long enough to go into the socket of the mp3 player) or stuck with gaffer tape. Do the same with the charging leads. I colour coded baskets, earphones and mp3 players partly because it makes it easier to ‘track’ them and partly just because it looked nice!

For my next batch I am making a few changes. Firstly I am pushing the boat out and buying DJ type head phones at £5.99 a set for younger children as some of them were not dexterous enough to cope with the other type.

I have also ordered a x4 multi-usb mains charger at £12.95 so that I can charge them all at once and it’s much quicker than charging through a computer.  However, you will still need to connect to you computer to sync the audio files.

Finally, Nic has suggested that I include an audio splitter so that groups of children can listen at the same time.  For individual use you may want the whole book recorded. However, he was interested in reading, say, the first chapter of a book then at the end of the recording, giving listeners a question to discuss.

One Response to “Reading bags”