You are here: Home » Squishy Circuits 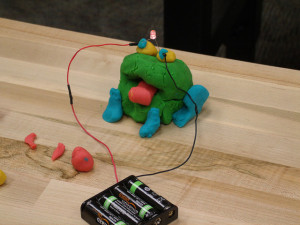 I’m not sure this is actually e-learning but it’s the best bit of fun technology I’ve used for ages and at minimal cost.  Basically, it is about using play dough to make electrical circuits.

(Given a few days, I’m sure I can justify the e-learning bit by connecting my circuits up to an arduino board or make makey.)

This is what you need

3 tablespoons cream of tartar (important – without it the dough goes slimy over time. Or lemon juice works pretty well if you don’t have any)

Mix the dry ingredients, add the liquid ingredients, including colouring, and mix well together.  Heat gently in non-stick pan stirring all the time with a spatula until it ‘sets’ into a dough.  Knead it on a board with more flour if necessary so that it has the right ‘doughy’ texture. 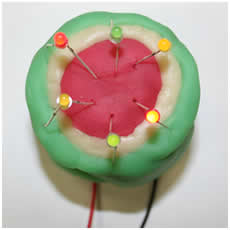 Mix dry ingredients, then wet ingredient and heat gently stirring all the time. Add more water as necessary (preferably de-ionised) from a spray bottle if you have one. You only need to add tiny quantities at a time. Keep kneading the dough on a floured boat until it is the consistency of modelling clay 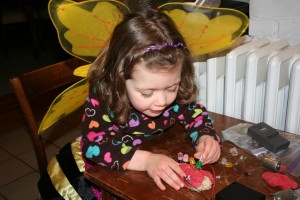 Roll two sausages of conductive play dough. Connect one to each terminal of the battery.  Press the ‘legs’ of an LED apart and stick one leg in each sausage of dough. (LED are directional – the longer leg should be connected to the positive pole.  If the light does not come on, swap the legs around!)

Make simple switch by pulling a flap from one piece of dough and touching the other piece of dough. The light goes out (electricity will take the path of least resistance, which is to go through the dough not the LED)

Then try replacing one conductive sausage with a sausage of insulating dough. What happens?

Then try putting the insulating dough between the sausages of conductive dough and see what happens.  Try the LED in each sausage in turn and across 2.

Then make spirals, cubes, one sphere inside another etc etc. Can you make a squishy monster whose eyes light up? can you make a birthday cake for someone?

How much of the underlying science you explain is up to you and the age and learning history of the children.

For older children, you can connect an arduino board into the circuit.

Or try demonstrating how potentiometers work by stretching the sausage. What is the diameter and length when the LED goes out?

Take an LED of each colour and wire each up to a conductive sausage of the same colour and a battery to make 3 circuits.  Wind a cable tie around the heads of the 3 LED so that they make a triangle and hold them so that they are horizontal. Put a sheet of translucent plastic (tracing paper works OK) in front of the LED so that when you look from the other side of the paper you can see 3 overlapping circles of light (with white in the middle, obviously).  break one sausage (e.g the green one) and see how the light changes to purple.  Or stretch the blue one and see the light getting ‘warmer’ and yellower. Explain how pixels work.

Absolutely safe. Worse case scenario is that a child connects LED straight to the battery, in which case it will blow and may shatter but this is unlikely.

Or they might connect the battery wires to each other – not dangerous but not good for the battery!

One last point, give the LED etc a wipe down after each use because the salt in the dough corrodes connectors after while.

Store the dough in a polythene bag and squeeze air out before sealing,

Thanks to AnnMarie Thomas at Maker Ed for some of these ideas. BTW – it is her daughter in the picture above!