You are here: Home » The maths of bar codes

Investigate the maths behind bar codes and QR codes. 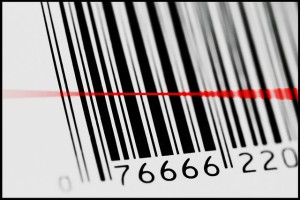 Create a Pinterest board or a Glog and pin or stick text, images or multimedia that answer some or all of the following questions. All the answers are easily available using a Google search or searching with Wolfram Alpha

(Answers at the bottom!)

The control number in an EAN bar code is the last digit. It just tells you whether the bar code on the tin of beans you have just bought was scanned properly. Some times the control number is the same size as the other digits. Sometimes it is a little smaller or moved to the right. The control number is calculated from all the other digits. Each of the other 12 digits is weighted alternately by 1 or 3,  with the last number being weighted by a 3. The weighted numbers are summed and subtracted from the nearest multiple of 10 which is equal or higher.  Get groups working on representing this as a series of mathematical statements, first in words using symbols. 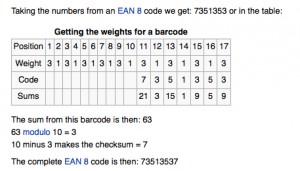 You could ask children to collect examples of e.g EAN8 bar codes and say why they think certain products have a bar code with fewer numbers (It is a system primarily designed for small products like chewing gum or cigarettes where the packaging simply does not have room for a longer number!) 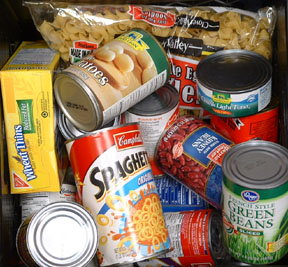 Another variation that we quite like is that the teacher takes in several pairs of items e.g 2 identical tins of beans, 2 tins of sardines, 2 packets of sweets etc.  Black out the control number for one of each pair and distribute these on each table.  (You need at least one item per table).  Let them work out the control numbers and write it on a piece of paper.  Put the other items of the pair in a row on the teacher’s desk with the control number visible. As soon as they have finished, they can run up and check their answer against the same item on the teacher’s desk. Make sure that one of the items is a tube of smarties which can be used as a ‘reward’! (recording their answer on a piece of paper is to make sure they are not cheating!)

You can either do this as a speed competition to see which group can do it fastest or, to give them more practice, as soon as they get an answer, they give their item to the next table and start again.

Ask them for any suggestions as to how they thing control numbers can check for errors. Then give them a problem to solve e.g

So what are the black lines above the numbers?

Explain that the numbers are represented by the long black lines above them.  The lines are the same length except for the longer pair at either end and in the middle, which just tell the scanner when to start and stop ‘reading’ the bar code. Each digit from 0-9 is represented by a series of lines of different thicknesses.

There are 95 lines in a standard bar code. Ask why they think all these lines are needed? The answer is because each number has to be converted into binary. If you have worked with binary numbers, you could ask each group to write the numbers 0-9 in binary then add up all the 0’s and 1’s.

Making a reader and play the game

Each child makes a slot in the middle of a piece of card (does not have to be exact!) about the width of their finger and about a cm in length. This is fiddly so you may have to do it.

Get each child to write down the numbers 1-15 in binary, if they can do it. Otherwise give them a chart or use on on-line converter. 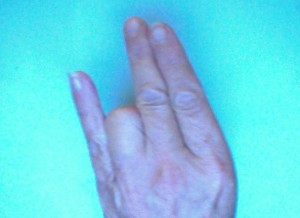 Let everyone practice making binary numbers with their fingers. It doesn’t matter which hand you use as long as you start with the finger on the left and keep the back of the hand towards the person making the number and the viewer.  A zero is finger up, a ‘1’ is finger down.  This is great fun to practice and can be a game in itself – as in “what number is this?”.

Then play the game in pairs. Both children sit at a table. One child chooses a binary number and represents that number by placing the right number and position of fingers on the edge of table. (Using the edge of a table makes it easy to keep fingers not in use tucked out of the way.)    They should hide the number of fingers with their other hand or ask their partner to keep their eyes shut.  They then place the card, with the longer side of slot orientated along the length of the finger on the left.  The second child is the bar reader and slowly moves the slot from left to right and works out the number.

Here are our answers to some of the quiz….

However, there are lots of people who would legitimately answer that some of these are wrong. Everything depends on definitions, interpretations, claims and counterclaims! But this is part of the fun – give the same children the same questions and depending on their sources, there will be a range of answers. This can generate heated discussion and makes the interest board far more interesting. Take the opportunity to talk about searching, reliability of data etc.